The Strange and Tragic Ending of Lucille Ball by Darwin Porter 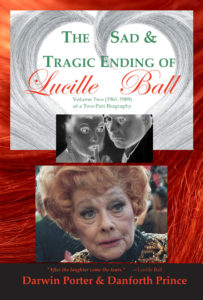 It’s been said by many, including the novelist, F. Scott Fitzgerald, that there are no “Second Acts” in American lives.

That’s wrong. Ronald Reagan and Lucille Ball are good examples of American celebrities who each succeeded at crafting influential “Second Acts,” components of which were massively and consistently broadcast to the world at large.

As an obsessive fan of the history of Hollywood, I have never had to subdivide any of the biographies I’ve written into two separate volumes. That changed when I tangled with the long-enduring saga of Lucille Ball, who in the mid-1950s rose to the top of the Gallup Poll as the most famous woman on earth.

First came Volume One, Lucille Ball & Desi Arnaz: They Weren’t Lucy and Ricky Ricardo. It was released (and widely publicized) about five months ago.

Now, media “guns” are already aimed at the upcoming release, in early December, of Volume Two. Consumers have good reasons to anticipate this with gusto: To my astonishment, the limited number of previous Lucille Ball biographies have each virtually ignored the last thirty years of her life.  They imply that her life ended in 1960 after her divorce from Desi Arnaz. One noted biographer summed up her three (emotional and fraught) final decades in five abbreviated pages.

In vivid contrast, we maintain that Lucille, an artist and renowned businesswoman, deserves more.

She’ll get it in the 500+ pages (with photos) of the soon-to-be-released Volume Two: The Sad and Tragic Ending of Lucille Ball, After the Laughter Came the Tears.

After Desi, what really happened to Lucille Ball?

A new life began for her. One aspect involved Gary Morton, a “Borscht-Belt” stand-up comedian with a gift for diplomacy and the tactful handling of divas.

She also reinforced her status as a reliable television “staple” with at least two ongoing (albeit derivative) series, The Lucy Show, Here’s Lucy, and as a last hurrah, the ill-fated Life With Lucy.

In reference to her second marriage, she confessed, “Now I wear the pants.”  Multiple witnesses assert that from her (separate) bedroom adjoining Morton’s, whenever she clanged a bell on her nightstand, he’d come running.

My Volume Two also examines the final years of a fast-collapsing Desi Arnaz, who, “post-Lucy,” gambled away his millions and destroyed his health with late nights, liquor, and endless Havana cigars.

Volume Two is also the first to explore the drug addiction (and recuperation) of Lucille’s son, Desi Jr., and the show-biz struggles (and occasional resentments) of both of her children, including Lucie Arnaz.

The book also contrasts Lucille’s “vintage mystique” with the emerging careers of other (younger) stars who admired and perhaps resented her, too. They included Carol Burnett, Mary Tyler Moore, Tom Selleck, Arnold Schwarzenegger, Cher, and about forty others.

It’s also filled with details about Lucille’s behind-the scenes banter with MGM’s and Warner Brothers’ and Fox’s “dragons of yesteryear,” once-celebrated stars dragged, by Lucille, back into the limelight through a formulaic and sometimes repetitive roster of “TV Specials” that celebrated a fast-dying way of American Life.

Warning: Lucille was famous for more of a “potty mouth” than either Frank Sinatra or Elizabeth Taylor. Her comments, sometimes scathing, were sometimes (how do I say this delicately?) “piquant.”

Extra-marital, post-Desi indiscretions?  Let’s just say that our favorite redhead liked her men big and strong—“No pretty boys for me.”

Her most frequent co-star in the final decade of her life was the nostalgic “for the way things used to be in Hollywood,” Bob Hope. A reporter asked Lucille to reveal something “we didn’t already know about ol’ Ski Nose.”

She answered in a way that surprised almost everyone: “Spiro Agnew, the disgraced Vice President of Richard Nixon, writes a lot of Bob’s jokes, although many of them are too dirty to ever get televised.”

In one format or another, the very durable Lucille Ball appeared on television every year of the last thirty years of her life, making her last appearance (alongside an even more durable show-biz warhorse, Bob Hope) at the Academy Awards on March 29, 1989. She died about a month later of heart failure. Tributes poured in from around the world.

Her legend, obviously, continues to thrive, stronger, perhaps, than ever.

This month, Director Aaron Sorkin will release a feature film about a “micro moment” in Ball and Arnaz’s life, Being the Ricardos, starring Nicole Kidman as Lucy and the Spain-born actor Javier Bardem as Desi. TCM will be broadcasting tributes to her, too, and episodes of I Love Lucy are being colorized for new generations of fans. Blood Moon Productions will release, as noted above, Volume Two of our two-part biography, the most comprehensive ever published. From the grave, Lucille might with irony and humor, refer to these media brouhahas as “My Comeback.”

Actually, she has never gone away. Her telecasts have been broadcast somewhere, in some country, every day since the 1950s. And in some regions of the world, little girls are, to an increasing degree, being named “Lucy.”

Her reign continues. Me? I LOVE LUCY.

Darwin Porter’s latest biography is Volume One of a two-part overview of one of the most famous couples of the 20th Century: “Lucille Ball and Desi Arnaz—They Weren’t Lucy & Ricky Ricardo.” With 530 pages, many favorable reviews, and hundreds of photos, it’s available now from Amazon.com. Its “end of an era” counterpart, Volume Two, “The Sad & Tragic End of Lucille Ball (1961-1989)” will be released in November. For more information about Porter’s biographies and the entity that produces hem, go to www.BloodMoonProductions.com or contact DanforthPrince@gmail.com.