Our December 2021 Book of the Month 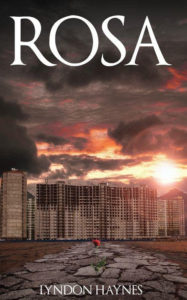 Readers: if you like novels that have a unbelievably cruel beginning, a dangerous middle and a breathtaking ending, this is a novel you must read.

The English author, Lyndon Haynes, is a Renaissance man, famous in the music and theater world, is enchanted about writing novels and has a vivid imagination which is why his novel, ROSA is so powerful.

The book is not for the faint of heart as there is much violence,and cruelty besieged by pathetic characters. I was very angry at Rosa’s brothers, Jesus and Dani, who took total advantage of her, treating their sister like a slave. Why does she, a beautiful Mexican young woman (girl at the beginning of the book) stand for this abuse? It’s a common predicament for poor people to suffer abuse since they have nowhere to go or money to help them escape.

The author is well educated and understands human psychology which allows his characters to run rampant in crime, sexual harassment, and a dangerous life on the streets of London.

Lyndon Haynes is a great weaver of situations that are compelling and dramatic, allowing the reader to walk into the pages of his novel. Terror surrounds Rosa at every turn as she tries to loosen the hold that her brothers have on her. Her spirit and bravery never leaves her mind, even where things seem hopeless for her.

Fate plays a strong incidence and Rosa believes that her hero, Daniel, has come to save her and take her away from her miserable life but it’s not easy to unwind the web Rosa is untangled in. The other three female characters played an important role, one being hateful and jealous, and the other two were devoted friends.

The good news is that yes, there was ultimately a happy ending, although there were “touch and go“ moments that made me mentally talk to Rosa to watch out for the different paths to take and choose carefully. ROSA is an exciting novel that may keep you up at night with its vivid descriptions but a well written book is designed to do that!

Lyndon Haynes is from Tottenham, North London, started as a child actor and then wrote music and became a rapper, traveling throughout Europe. Writing has always been his passion and he has written four books. He has also been writing film and television drama.