Facts and History of Electric Bicycles 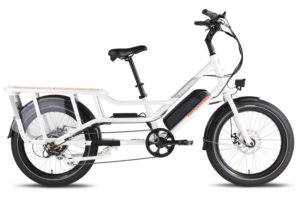 Electric bicycle (e-bike) is the only transportation device that managed in the last 20 years to take significant part of the bicycle market share. With its simple design that closely mimics traditional bicycle, small and efficient electric motor and easy control methods, it successfully experienced rapid sales growth since 1998. Today, it is estimated that there is approximately over 120 million electric bicycles in use in China alone.

Use of electric bicycles in Europe and North America is growing fast, with the reported yearly sales of one and a half million units.

One of the most appealing features of electric bicycles is that it has no harmful emissions from combustion engine with zero chances of Earth pollution. Even if we include the cost of frequent battery changes, e-bike is many times more environment friendly than any other public road transportation device (it is 18-13 times more efficient than automobile, 6 times from rail transit and has same environment impact as traditional bicycle). Another advantage of electric bicycle is its rehabilitation use with recovering health patients. For example, patients with cardiac problems can greatly improve their mobility if they use e-bike models that help them to reduce muscle strain and cardiac exertion. One of the down points of the electric bicycle has been noted in China. Speed of the e-bikes proved to be troubling when they were used on the traditional roads that were intended for traditional bicycle use (bike lanes).

First models of electric bicycles appeared in late 19th century. US Patent office registered several e-bike patents since 1895 to 1899 (Ogden Bolton patented battery-powered bicycle in 1895, Hosea W. Libbey patented bicycle with double electric motor in 1897 and John Schnepf patented electric  motor with roller wheel). Models with torque sensors and power controls became available during late 1990s. One of the first commercially successful e-bike models appeared in 1997 with the name “Select”. Year after that there was over 49 different e-bike models available on the market. In the early 2000s, two big Japanese companies Yamaha and Panasonic became their worldwide mass production.

Main design of e-bike consists of the traditional bicycle frame (with or without pedals) and a small electric motor (up to 750 watts) powered with light rechargeable batteries. Power of those motors is limited to produce maximal speeds of 15 to 20 mph. There are several types of motors currently in use most notably direct-drive and geared. Transmission to the wheel is done with chain drive, belt drive, hub motors or friction drive. One of the early models of electric bicycle from 1980 had a solar charging station, which was used to replenish on board batteries.

Today, worldwide production of the electric bicycles is in the steady rise. Countries around the world have different rules that regulate their use on the public roads. They are often classified in the same class as bicycles, but somewhere they are regarded as one sub-type of motorcycles and motorized bicycles.