The Return of the Woolly Mammoth? By Darwin Porter 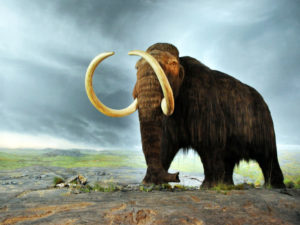 The sci-fi film, Jurassic Park, created a sensation across America when it opened in movie theaters in the summer of 1993. Its theme centered on a disastrous attempt to create a theme park of cloned dinosaurs. A series of lucrative spin-off films followed, the latest, Jurassic World: Dominion, set for release in the summer of 2022.

Science fiction may one day become a reality. Some world scientists, working for a privately funded investment group called Colossal, are spending millions of dollars hoping to bring back the magnificent but extinct woolly mammoth to the Tundra of Siberia.

The huge animal roamed the earth 55 million years ago, and some mammoths last inhabited Wrangel Island in the Arctic Ocean as late as 4,000 years ago.

For a genetic “renaissance,” the mammoth was chosen over other species because of the discovery of frozen carcasses in Siberia and Alaska, from which DNA samples were extracted.

In 1929, news electrified the world that 34 mammoths were discovered frozen in Siberia with soft tissues such as skin, flesh, and organs intact.

In the last few weeks, Colossal announced it is now moving ahead in its laboratories to bring back the mammoth, perhaps using the bodies of present-day elephants, its nearest relatives. Every scientist involved admits that the outcome, although gargantuan, will be possible, although ethically complicated. “Who,” scientists have wondered, “will decide whether they can be set loose, perhaps to alter world ecosystems in unforeseen ways?”

The U.S. government has announced that with present climate change conditions, some one million plant and animal species many disappear from the planet within a century. Only this past summer, the ivory-billed woodpecker, which once graced the bayous of the American South, has not been spotted in years. The song of the Hawaiian Kauai O’o bird exists only in recordings. Hundreds of other plant and animal life in the last century have been moved from the Endangered Species list to the roll call of the Extinct.

Other “ethically complicated” breakthroughs are predicted by scientists in decades and centuries to come. Dr. Peter Bracket even suggested, jokingly, or otherwise, that “one day we might have George Washington, even Elizabeth Taylor or Marilyn Monroe, make their comebacks.”

“And if we can get Moscow to turn over the charred remains of Hitler, removed from the Berlin bunker during the closing hours of World War II,” he continued, “we might put Der Führer on trial for crimes against humanity.”

Darwin Porter’s latest biography is Volume One of a two-part overview of one of the most famous couples of the 20th Century: “Lucille Ball and Desi Arnaz—They Weren’t Lucy & Ricky Ricardo.” With 530 pages, many favorable reviews, and hundreds of photos, it’s available now from Amazon.com. Its “end of an era” counterpart, Volume Two, “The Sad & Tragic End of Lucille Ball (1961-1989)” will be released in November. For more information about Porter’s biographies and the entity that produces them, go to www.BloodMoonProductions.com or contact DanforthPrince@gmail.com.