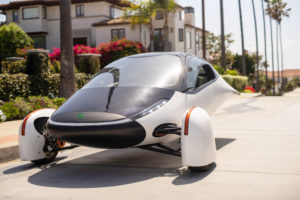 The Aptera 2 Series (formerly the Aptera Typ-1) was a high-efficiency three-wheeled passenger car designed by Aptera Motors that failed to reach production.

An Aptera 2 made a short appearance in the 2009 film Star Trek.

The company opened pre-ordering for residents of California but stopped taking deposits in July 2011. On 12 August 2011, Aptera announced it would return all deposits from customers who had signed up to buy a car.

In 2019, Aptera Motors was re-formed by the original founders, Chris Anthony, and Steve Fambro, and began developing a much revised solar-powered EV, the Aptera (solar electric vehicle), with up to a 1,600 km range.