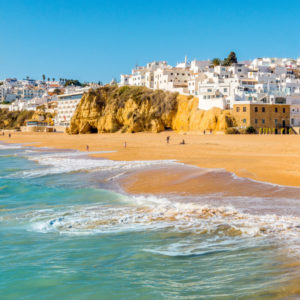 If you’ve ever thought about living overseas in your retirement years, but were a little nervous about making the big leap, a “test-drive” of expat living might be just what you need to see if retired life in a foreign country is right for you.

That’s exactly what the experts at International Living Magazine are giving away to one lucky couple (or a single person and a friend) in their latest Win Your Dream Retirement Overseas Competition.

And it’s not just any country the winning pair will be sent to for a month in 2022; they’ll live in Portugal — consistently named among International Living’s best places to retire abroad. (It’s number five on the list for 2021.)

The prize includes round-trip airfare for two from the United States to Faro, the capital of Portugal’s Algarve region; furnished accommodations in the region for a full month; plus $1,500 in living expenses.

Portugal Is A Hot Spot For Expat Retirees

TravelAwaits’ expert contributors Sue Reddel and Diana Laskaris grew to love Portugal so much after touring the country, they now make it their home, calling it “perfect for expat retirees.”

In particular, the Algarve region, the southernmost part of Portugal, is where “retirees can find excellent bang for their buck — along with sunny skies, friendly locals, strong infrastructure, and truly postcard-worthy [surroundings],” says Jennifer Stevens, the executive director of International Living.

International Living’s Portugal correspondent Terry Coles adds, “This region of Portugal has earned its reputation among expats by providing a resort feel, while at the same time maintaining the authenticity of this beautiful country. Scores of golf courses, from easy to award-winning, stud the coastline.”

How To Enter To Win A Month’s Stay In Portugal

If exploring beaches, meeting new people, and living like a local in Portugal sounds good to you, the first step in entering the Win Your Dream Retirement Overseas Competition is by typing in your email on the contest page. You’ll receive a link to fill out a short form, where you’ll be asked why you’re interested in living abroad. The deadline for entry is midnight (EST) October 18, 2021.

From the initial pool of applicants, International Living editors will narrow the field to 20 finalists. Those finalists will be asked to produce a short video introducing themselves.

The public will have a chance to chime in on their favorite finalist videos, and from there, the field will be narrowed to three. The magazine’s staff will interview the final three candidates, and they’ll be asked to produce one more video before a final winner is announced in December.

The contest is open to residents of the United States. International Living says that ideal candidates are at retirement age, or “close to it.”

Although no writing experience is necessary, the winner will be asked to share impressions and experiences with readers of the magazine, as well as the company’s website, social channels, and newsletters.

If you’re named the winner, the International Living staff will secure accommodations, such as an apartment rental tailored to your needs. And there’s flexibility for your timeframe in moving to Portugal, but you should be ready to relocate for 30 days in 2022.