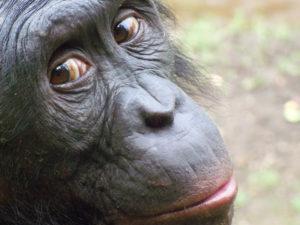 We stand on the threshold of a future without chimpanzees in the wild. The IUCN/World Conservation Union Red List of Threatened Species says each of the species of African great apes – chimpanzees, gorillas, and bonobos – as endangered. African apes are largely confined to the relatively intact forests of Equatorial Africa as their last remaining stronghold. Chimpanzees are extinct in four of their 25 range countries (Gambia, Burkina Faso, Togo and Benin). Where they numbered perhaps 1 million at the turn of the 20th century, today it’s estimated there are 172,000-300,000 chimpanzees remaining in the wild. Current trends indicate that African ape populations will decline by an additional 80 percent in the next 30-40 years. We have a generation and a half — possibly two — to alter the trend.

The threats to great apes in the natural world are many.

Habitat loss is a result of conversion of land for agriculture and competition for limited natural resources such as firewood, as well as commercial logging and mining, often in the heart of once pristine forest.

The commercial bushmeat and illegal exotic pet trades give poachers incentives to kill even nursing mothers. Infectious diseases such as Ebola Fever, to which great apes are inherently more vulnerable as their numbers decline, may become as serious a threat as we have seen.

Armed conflict often leads to environmental destruction and species decline as soldiers move through the forest or thousands of people are forced to relocate. And there are exacerbating factors – lack of awareness and information about great apes and the laws in place to protect them, and weak enforcement where laws do exist. Nor is the general public aware of the potential economic benefits of protecting great apes.

All of these problems have deep roots, including human population growth, the staggering scale of poverty and disease, lack of economic opportunity, political indifference and corruption, conflict, and scant community involvement in managing natural resources. To begin to make a difference in the face of such fundamental challenges requires a holistic, multi pronged response.