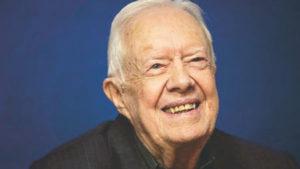 We celebrate the 97th birthday of former President Jimmy Carter on October 1st. The Plains, Georgia native is certainly unique in comparison with other Presidents.

Carter, the only United States Naval Academy graduate to be elected to the White House, endured a roller-coaster four years in office. But much of his public career began after leaving Washington, D.C. in 1981.

Here’s a quick look at some fascinating facts about the 39th President: