The New, The Brave, The Lifesaving Dogs 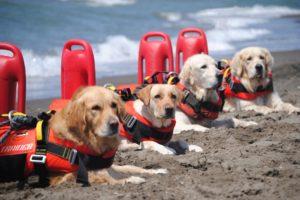 Stories about sled dogs hauling medicine and supplies through the frozen wilderness have become the stuff of legends, but did you know pups are proving just as powerful in the waves as they are on the ice?

In Italy, an elite squadron of 350 specially-trained canines from the Italian School of Water Rescue Dogs (Scuola Italiana Cani Salvataggio, or SICS) has successfully been patrolling the beaches, working as lifeguards.

300 SICS units, consisting of one dog and one trainer, are tasked with watching over approximately 30 of the country’s busiest beaches.

Thanks to their willingness to perform, strength, and fearless exploits—including leaping from helicopters into the surf below to rescue at-risk swimmers—an average of 20-30 lives are saved annually by the doggie guards, and that number continues to climb each year.

Earlier this month, when several families, including eight children, were imperiled by strong wind and wave conditions while 330 feet from shore, three canine lifeguards and their trainers rushed in to save the day.

With the help of their human companions, dogs Eros, Mya, and Mira pulled everyone to safety in about 15 minutes.

The SICS program is the brainchild of 59-year-old Ferruccio Pilenga, who got the idea that dogs would make excellent lifeguards back in 1989 from watching his own Newfoundland, an immensely powerful swimmer named Mas.

“He pulled a water-filled dinghy with three people on board for half an hour,” Pilenga told The Times of London. “A human cannot do that.”

The SICS program is an arduous one. After 18 months of basic training, only those dogs successfully completing the required steps are deemed ready to move on to the more intensive aspects of lifesaving techniques, such as jumping from helicopters and leaping from speeding boats.

SICS teams are recognized for being especially effective in the face of large-scale life or death scenarios. Thanks to their special training, they’re better able to carry out the simultaneous rescue of multiple swimmers in situations where the capabilities of one or two lifeguards might be easily overwhelmed.

“To be able to use a dog in a water rescue mission gives the rescuer a leg up. The rescuer who operates on his own is alone. We are never alone. We are always in a team with our dog so it’s a six-legged unit. I can conserve my energy and become a more effective rescuer,” Plienga told Great Big Story.

“To make [people] understand, I always say, ‘To pull a sled, it takes at least six dogs, to pull six people, you only need one dog.’”

While the success of the program can be partially attributed to the dogs’ acutely attuned survival instincts that help them find the safest route to shore, as well as their stamina and ability to follow commands, Pilenga believes the emotional component they bring to their work cannot be underestimated.

“The presence of the dogs helps to lighten up the situation. The biggest reward is the emotion that the dog and the owner feel at the moment of the rescue, which further unites that special bond between dog and human.”

Italy is currently the only country to recognize certified canine lifeguards, but training centers are being set up for dogs in the U.S., Germany, Switzerland, and the Azores, with SICS eager to spread its safety net to encompass wider waters across the world.