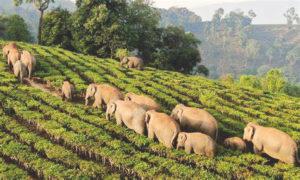 For several weeks now, China and the world have been transfixed on a herd of 15 wild elephants roaming the country’s southwest region. Among the 15 in the herd, three are mere babies—one of which was born on the trek.

No one knows why the elephants are on the move, exactly. But speculation is that the herd is escaping human encroachment on their environment.

These mighty beasts have wreaked havoc in their wake, trampling crops to the tune of over a million dollars’ worth of damage. Yet, millions have tuned into the internet to watch video captured from more than a dozen drones operated by local police and naturists.

The police have been following the herd to ensure the safety of the elephants and of the residents alike.

Asian elephants are primarily found in Yunnan, a southwest province of China and are under A-Level state protection. Since under this protection, the Asian elephant population has rebound from a low of 193 to upwards of 300.