“The Apple and the Shady Tree” by Lisa Novick Goldberg

“The Apple and the Shady Tree” by Lisa Novick Goldberg

Other than watching TV shows and movies, I didn’t know much about the Mafia, so this book explained on a personal note, who, what and why they were such a force. This autobiography is unusual since it was written by the daughter of a man that was involved with the Mafia in New York, from the time she was a young child, until she was an adult. Her descriptions of her father, Herbert (Johnny) Novick, her mother, Janet Matlick, her sister and other family members were real and powerful. What a life she had!

Reading her book, The Apple and the Shady Tree, was so interesting and researched that I felt I was living with her, while she was going through the scenarios and complexities of being the daughter of this malfunctioning family. It took its toll, as she has spent many years in therapy, working through the traumatic years of confusion, dishonesty, neglected love from her parents, a disappointing first marriage, being a mother and, in general, living a nightmare of sorts, yet enjoying the financial rewards and luxury surrounding her.

Lisa Novick’s mother, Janet Matlick, was described as beautiful, but had mental problems which got worse as she aged. She wasn’t the kind of mother Lisa wanted, so for those of us who loved our mothers and they loved us, this was a tragedy.

The author is an excellent writer, describing her life in chapters. Some are long and often intimate. Others are short but important to keep the onion peeling. Many of the chapter titles explained what the book reveals: The Murder: The Beginning of the End; Family Time at Its Best and Worst; I Have a Sister; Life in Suburbia: The Early Years; Those Wacky 1970s; College Years; Las Vegas; The Early 1980s; The Record Industry; The Garment Center; Atlantic City; A Husband for Me; Maggie, My Daughter; It All Came Tumbling Down; Closure; I Might Be Having A Nervous Breakdown.

Each segment dealt with that time and space of her life with clear and lucid descriptions of the good, the bad and the questions she never received answers to from her family, mostly her father, who was her hero in many ways. He adored her and wanted to protect her as best as he could, but as he grew older, he needed her assistance with his many enterprises, many dangerous at that time. She dedicated her book to him saying, “To my father, whose life lessons, both good and bad, taught with intention or otherwise, made me strong.”

The happy ending is that Lisa finally found the family she had always hoped for. The man of her dreams as she described at the end of her book: … “In 2011, I met Stanford Blake, who is a celebrated retired circuit court judge who served on the bench in Miami for twenty-two years, sixteen of which were spent on the criminal bench. We married in 2017. My father would have loved him.” 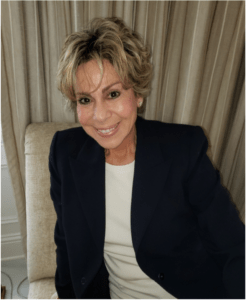 Lisa Novick Goldberg was born in Brooklyn and grew up in the Five Towns on Long Island. She has a bachelor’s degree from Vassar and a master’s degree from Columbia in International Affairs. She lives with her husband in Coconut Grove, Florida. This is her first book.

(Purchase THE APPLE AND THE SHADY TREE on Amazon.com.)