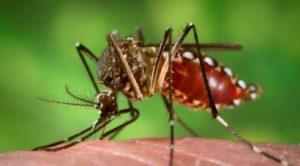 Hearing the words “genetically modified mosquitoes” can sound like the plot for a science-fiction movie but Meredith Fenson, a native Floridian turned biological pest control specialist says, “mosquitoes are the world’s deadliest animal by far” and a study happening right now in the Florida Keys could help change the tide.

Fenson works as the head of global public affairs for Oxitec and talks about how genetically modified mosquitoes work, concerns surrounding their release and Oxitec’s plans to release more in the future.

Aedes Aegypti, the yellow fever mosquito, only makes up about 4% of the population in the Florida Keys but Fenson says they are responsible for virtually all the diseases spread from mosquitoes to humans. She says this includes Zika, dengue fever and Chikungunya.

What are genetically modified mosquitos?

This species is also behind spreading heart worms to pets, according to Fenson.

To reduce the impact of the non-native insects Oxitec biotechnology has started releasing genetically altered male mosquitoes in The Keys. The males, which don’t bite, contain a genetic change in a protein that would render any female offspring unable to survive — thus reducing the population of female mosquitoes, which do bite, and transmit disease.

The process, according to Fenson is quite simple.

“We have little boxes, we put mosquito eggs and a tiny bit of food in these boxes, they have holes near the top. We close the boxes and after a week or two our male mosquitoes begin to release themselves,” Fenson said. “They fly out when they are ready. That is when they do what they do best they find and mate with the Aedes Aegypti females.”

Fenson says this is a good alternative to pesticides because it is very targeted. She says the males only mate with other Aedes Aegypti mosquitoes and pose no risk to other insects. She also says insecticides lose efficacy over time.

The plan was approved by The Florida Keys Mosquito Control District. Fenson says Oxitec has led workshops to help people in the area overcome their concerns about the project and that so many people have signed up to put Oxitec boxes in their yards there is a wait list for families to get involved in the research.

Because Aedes aegypti only makes up a small percentage of the mosquito population in the Keys Fenson says host families and their neighbors likely won’t notice a change in how often they are bit. But the research done here in our state could have a lasting impact across the country.

“This is a small project and it’s mostly being used to provide additional data to the EPA and other regulators in the United States so one day we can do bigger projects here,” Fenson said.

To learn more about genetically modified mosquitoes, the success of their use in Brazil, and how Matt Austin feels about their mating habits download this episode of Florida’s Fourth Estate from wherever you listen to podcasts.