The New York Symbol of Optimism and Resilience Turns 90! 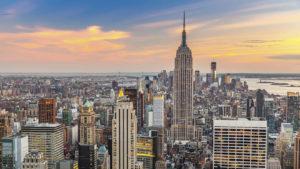 New York’s most iconic skyscraper, the Empire State Building, turned 90 this year on May 1, and it’s as relevant as ever. There are bigger buildings. There are gaudier, more astounding ones.

But on the occasion of its 90th birthday—May 1—let be said for all time: there is only one Empire State Building.

“It’s a beloved structure,” said Lilly Tuttle, curator of the Museum of the City of New York.

“Every major city in the world has its symbol, whether it’s the Eiffel Tower or the London ‘Big Ben’ clock tower, or the Hollywood sign,” Tuttle said. “In New York, it’s the Empire State Building. Absolutely.”

It’s also a building with a message for 2021. Two messages, really.

One is the amazing things people are capable of, in the worst circumstances. For the Empire State Building, you’ll recall, went up in the depths of the Great Depression, when bread lines were everywhere, when the unemployment rate was 15.9%—a period at least as grim as our current COVID crisis.

“They had truly little problem getting workers,” said John Tauranac, author of “The Empire State Building: The Making of a Landmark.” “Workers were desperate for jobs.”

The other takeaway is the American genius for building things: dams, suspension bridges, interstate highways, great buildings. Perhaps—as President Joe Biden suggested when he unveiled his infrastructure plan on March 31—it’s time to do so again.

“In moments like this, infrastructure, art, engineering, can be a big part of the recovery movement,” Tuttle said.

Today, as ever, the Empire State Building is a symbol of optimism and resilience. It was one of the first public attractions to reopen after last year’s COVID shutdown: on July 20 (and in conformance with state guidelines).

Over the past few years, it’s been subject to $165 million worth of upgrades—including a revamped 102nd-floor observation deck, a fabulous glass elevator, new museum space and a new dedicated entrance.

“Unless you have visited since Nov. 28 of 2019, you do not know the Empire State Building,” said Jean-Yves Ghazi, president of the building’s observatory. The place has been COVID-proofed, with timed admissions, hand-sanitizing stations, new air circulation systems and more.

“There’s no better time than now, with the capacity controls in place, the low crowds,” he said. “It’s an absolutely stellar experience.”

It always was. People were going ape for the world’s most famous skyscraper even before it opened in 1931, even before King Kong, in 1933, climbed to the 102nd story with Fay Wray screaming in his giant mitt.

During its 13½ months of construction, in 1930 and ‘31, crowds would gather at the site to watch the steam shovels dig and the jackhammers chatter, to see the mammoth structure rise at the rate—at one point—of one story per day, to watch the brawny steeplejacks on 40-story girders walk nonchalantly across the sky like Greek gods.

At a time when the entire country was paralyzed by fear, when all progress had come to a standstill, this was an object lesson in hope. “They put up a fence around the site, so people would look down into the hole in the ground, even before they started erecting,” Tauranac said.

“People liked to visit it, and look at it,” he said. “There was a guy who set up a telescope in Bryant Park and had a little freelance business. He would allow you to look at the construction of the Empire State Building for 2 cents.