53 Years of Marriage and 100 Foster Daughters

This Ohio Couple Made “A Home for Everybody!” 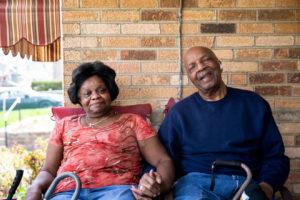 They don’t remember the names.

How could they? Ann and Al Hill fostered about 100 girls, mostly teenagers, over nearly three decades. What they do remember, and in some cases what they will never forget, are the streets where the girls moved after they left.

Because they visited them.

Their daughters had gone off to college, and their home in Cincinnati felt empty. To the Hills, it wasn’t a big deal. To hear them tell it, bringing strangers into their home and caring for them—as if they were their own kids—was no more difficult than a trip to the grocery store.

This is what makes the Hills remarkable: They don’t think they did anything special.

Al is sitting near their front porch, soaking up the sunshine on one of Cincinnati’s first great days of spring. Hanging from the roof is a sign that says, “Be not forgetful to entertain strangers.”

Not many people on their street are strangers to Al, but he waves to them anyway. When his wife steps outside, Al moves his chair up onto the porch in the shade. At 79, he has trouble walking. Ann is 78. Until last year, they were still fostering.

The two sit down next to each other holding hands for a photo, canes in between their legs. They’ve been married for 53 years.

Ann never really smiles, even though her daughter tells her to. It’s been a rough year. In August, their 46-year-old daughter Rhonda died after being diagnosed with cancer. Ann wears a necklace with her picture on it.

Al does most of the talking today, and most days, occasionally leaning over to his wife to check his memory.

Ann doesn’t speak very loudly, and sometimes it’s hard to hear her. Yet everyone knows she’s in charge.
As a foster parent, she was strict. Her home had rules. Al remembers her making their girls brush their teeth again if they didn’t do it correctly the first time. Yes, she was stern, but the girls found she was someone they could always call. And sometimes, that was all they needed.

Ann and Al Hill sit on the front porch of their home in Cincinnati on Tuesday, April 6, 2021. In 1993, Ann and Al started fostering teenage girls. They have been foster parents to 100 girls. Al said, “We made our home for everybody.”

Born in Georgia, Ann and Al both moved to Cincinnati and met as sophomores in high school. Al had 16 sisters but didn’t grow up with them. Ann was raised by her aunt.

In school, Ann said Al was a nuisance. Al said Ann was smart.

When Al was drafted into the military, Ann wrote to him. Maybe more importantly, when he was serving in Vietnam, she sent him baked goods. Five decades later, he almost salivates describing her pound cake. She was the only person in the world who could bake better than his grandmother, he said.

To Al, a bus driver and manager for 37 years, fostering was often that simple. He and his wife could provide a bed and homecooked meals for young girls who needed them.

“You know what you learn?” Al says. “There are so many people with nowhere to go.”

Asked how the couple benefited from providing foster care, Ann tells a story about a girl whose brother pushed her out of a window to save her during a fire. For a long time, Ann didn’t know the brother died.

When the girl finally told her, Ann found a photo of him, framed it and placed it next to her bed.

The point of the story wasn’t so much what Ann got out of their relationship, but more to illustrate she could help in some small way. Because the truth is all their girls had lost something. And for people who don’t have anything, sometimes the small things can feel the biggest.

Ann never really answered the question about how she benefitted from foster care. Maybe she doesn’t know. Maybe time has dulled the bad memories. Maybe it really was that effortless.

“Off duty” are the words embroidered on her slippers.

Maybe it seems easier now because Ann and Al are both retired – from working and fostering. Because while this story is about the Hills,  it’s also about the girls. Even the ones who ran away or stole from them. The Hills couldn’t save everybody, but some of their foster girls still visit for Thanksgiving dinner. Some of them still call. And for Ann, that’s enough.