“They Weren’t Lucy and Ricky Ricardo” 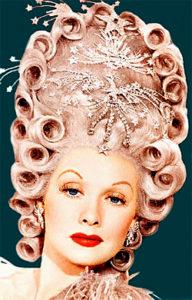 In 1955, a survey revealed that Lucille Ball was the most recognizable face on Planet Earth.

With her husband, Desi Arnaz, a bandleader, and émigré from Cuba, they launched TV’s most successful sitcom, I Love Lucy, at the tail end of the Golden Age of Hollywood.

Even today, somewhere in the world, the series is still being shown on a 24-hour cycle. The original black-and-white celluloid is being colorized for new generations, and Nicole Kidman is set to star as Lucille in an upcoming feature film.

Millions of fans believe that Lucille and Desi played themselves as Ricky and Lucy Ricardo, their fictional characters on TV. As this book reveals, that isn’t exactly true. Both were savvy business executives. Lucille, for example, morphed herself from a $50-a-week RKO extra into a multi-millionaire. Along with Desi, she bought RKO, the major-league movie and TV production studio formerly owned by the spectacularly unstable aviator and oil-industry mogul, Howard Hughes.

Despite their enormous success, many aspects of their personal lives were tragic. As Desi himself once said, “We had our daughter, we had our son, we

had a fabulous career, and we were in love. Then the shit hit the fan.” 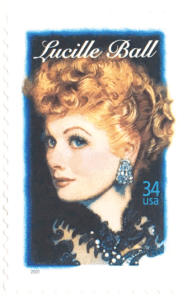 For such a well-publicized couple, their complete story has never been told, especially their early years. This has radically changed with the publication of Blood Moon’s latest biography, Lucille Ball & Desi Arnaz: They Weren’t Lucy & Ricky Ricardo. I co-authored it with Danforth Prince.

Their stormy and struggling early days live again. Growing up in western New York State, Lucille was known as “The Jamestown Hussy.” At sixteen, she launched an affair with Johnny DaVita, a dangerous but sexy local hoodlum.

She later pursued a career as a model in Manhattan, posing topless between stints as a fashion plate for haute couture. By 1933, she’d drifted to Hollywood as a scantily clad “Goldwyn Girl.” In her first picture, she portrayed a nude Roman sex slave, her vital zones concealed only with the tresses of  her long blonde wig.

From there, she worked her way up the Hollywood ladder, rung by rung. Her mentor, Lela (mother of Ginger) Rogers, advised Lucille that the quickest way to stardom was on the casting couch. In addition to producers and directors, she sometimes seduced movie stars, notably Henry Fonda, Peter Lawford, William Holden, Victor Mature, and Robert Mitchum.

Her many affairs were fewer than those of her future husband, Desi Arnaz, a copious philanderer, even during his two decades of marriage to Lucille.

After a revolution in his native Cuba, he and his father arrived penniless in Miami. Desi got a low-end job cleaning out bird cages, but in time, he re-invented himself as a musician, eventually rounding up a band of his own. He became famous for introducing a giddy, inhibition reducing version of the Conga to millions of norteamericanos.

In Manhattan, Desi became the city’s latest Latin lover, eventually seducing Ann Miller, Ginger Rogers, Lana Turner, Gene Tierney, Betty Grable, and (according to legend) each of the young women employed at Polly Adler’s bordello, the most notorious in America.

Their saga is not described just through their affairs. As “the King and Queen of Television” they launched the I Love Lucy series, which made them millionaires. Eventually, they bought RKO and launched Desilu Productions.

Lucie Arnaz, their daughter, reflected on the marriage of her parents: “They had one of those historic marriages like Napoléon and Josephine or Richard  Burton and Elizabeth Taylor—destined to be troubled but also destined for them to never find anyone else so passionate or so fabulous.”

As authors, we opted to divide their amazing story into two Volumes, the first of which will be released this month through, along other vendors, Amazon.com.

It describes each of their second marriages, and how each, with varying degrees of success, struggled to replicate their smashing success of their earlier gigs.

Yes, both volumes are permeated with self-doubt, anguish, and tragedy, yet each reflects an overview of “The American Century” and its go-go 50s that few other sagas can replicate.

In 2001, the U.S. Postal Service evaluated the key role Lucille Ball played in our lives and issued a 34-cent stamp emblazoned with her likeness. 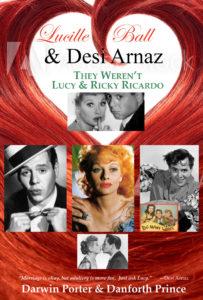 Darwin Porter’s latest biography is Volume One of a two-part overview of one of the most famous couples of the 20th Century: “Lucille Ball and Desi Arnaz—They Weren’t Lucy & Ricky Ricardo.” This 530-page book with hundreds of photos is available now from Amazon.com. Volume Two will be available in early October.

For more information about Porter’s biographies or how you can meet him at Magnolia House in New York City, go to www.BloodMoonProductions.com or contact DanforthPrince@gmail.com.