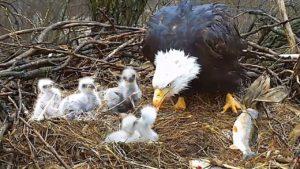 Eagles seem to be excellent parents. The mom lays the eggs and then once hatched, typically about three of them, both mom and dad tend to them, separately. It’s all about food! Since they don’t drink milk, it’s a harder task.

Eagle chicks are fed a steady diet of fish, occasionally supplemented by waterfowl (ducks, geese) or water birds (gulls, cormorants). About 85% of a chick’s diet will typically consist of fish such as carp, white sucker, shad, bullhead and sunfish. The adults capture and tear the fish into small strips, offering them to the chicks. The chicks snatch the food from the adult’s beak and swallow it whole. An eagle chick will eat as much as it can at a single feeding, storing food in its crop. The crop, an organ located near the base of the bird’s neck, will enlarge as it fills, resembling a golf ball. 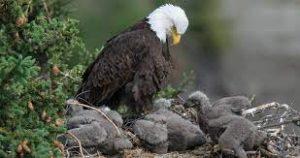 brooding. The male will often eat the head of the fish he catches and then bring the remainder to the nest. The male will brood and feed the chick when the female is off the nest. She will leave to stretch, defecate, bathe, preen and hunt on her own. The chicks will be nearly full grown at 9 weeks of age. They will add some weight as they develop their flight muscles after they leave the nest. Their wingspan will be as large or slightly larger than the adults at this time.

Once most of their wing and tail feathers are developed, the eaglets can finally leave the nest. First flights usually occur at 9 or 10 weeks of age and are preceded by vigorous exercising and flapping. When a male and female are in the same nest, the male may fledge first. Sometimes the adults will force the eaglets to fly. When chicks leave the nest, they usually glide to a nearby tree or stump, returning to the nest tree frequently and continuing to be fed by the adults. 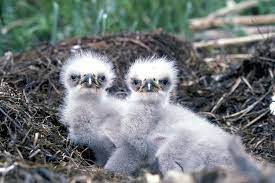 At first the eaglets have difficulty landing on tree limbs. However, if they land on the ground, they need open space to flap their wings to become airborne. While eaglets improve their landing and flying skills, they depend on their parents for food. The adults will bring food to where the eaglets are perched. Eaglets will stay close to the nest and nest tree during the first few weeks after fledging. Within one month after fledgling, eaglets will soar and drift over the water. The eaglets are poor hunters and may scavenge on dead prey instead. As the chicks develop their flight skills, they harass the adults and try to take fish from them. This behavior helps eaglets learn to forage and be independent and will last into September.

Sounds familiar???? At 17 to 23 weeks of age, the bond between the adults and their young fades and the adults no longer tolerate harassment from their offspring. This is the time when the young eagles leave the territory, following the prevailing winds to more northerly shorelines and water bodies in search of good feeding grounds. The young eagle will spend the next 4 years of its life wandering across eastern North America looking for summering and wintering areas where food is accessible. The mortality rate for eagles during their first year of life is greater than 50%, but once they have learned to hunt and successfully forage their chances of reaching adulthood are good. When it begins to mature at age 4, an eagle seeks a mate and establishes a territory. The territory is usually located within 250 miles of the nest where the eagle was hatched. There, the new pair of eagles will construct their own nest but often don’t produce eggs or young during their first year as a pair. They’ll
return in following years to raise young of their own.

As we read these facts, we see such a similarity between humans and their offspring, don’t we?