Who is the Father of Prince Harry?

Who is the Father of Prince Harry? 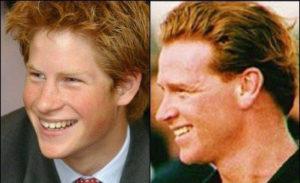 Millions of people around the world watched Oprah Winfrey’s recent television interview with Meghan Markle (the Duchess of Sussex) and her Duke, Prince Harry.

The controversial interview sparked debates about racism in the Royal Family. Regrettably, throughout Britain, it also revived old, oft-repeated claims that the red-bearded Harry is not the biological son of Prince Charles.

Decades-old rumors about Harry’s paternity were renewed, especially when he revealed to the world that Prince Charles no longer received his phone calls.

There is little doubt that the Queen, years ago, ordered DNA tests, and although officially, she has remained “Mum,” she’s (privately) aware of his true paternity.

Harry doesn’t look like Charles. Nor does he look like his blond-haired (now balding) brother, Prince William, second in line (after Charles himself) to the 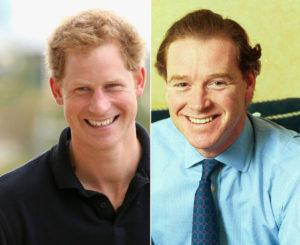 But there’s a roaring undercurrent in the U.K. about OTHER issues rekindled by Oprah’s interview, even though CBS rigorously avoided mentioning them last month on camera.

When Princess Diana was at the peak of her beauty and sexuality, and as Prince Charles maritally “abandoned” her for in flagrentes with his then-mistress (Camilla), Diana (discretely or not) went searching for love elsewhere.

Prince Harry was born in 1984. Catalyzed by intense media pressure at the time, Buckingham Palace’s ongoing “official” version informs us that Diana met, fell in love with and launched an affair with James Hewitt two years later. According to the official version, she fell in love with Hewitt one afternoon in 1986 while watching the dashing cavalry officer competing in a polo match.

Born in April of 1958 in Derry, Northern Ireland, Hewitt was red-haired and handsome, with a roving eye trained on the then-most-publicized young woman in the world.

From afar, Hewitt had always—the official version says—adored her. Numerous biographies have revealed that she was sexually attracted to him from the moment of introduction. Soon, their affair was in full swing, although at first, they had to be very secretive.

Their love and their long-lived sexual affair, as articulated—in print and on TV by the Princess herself—is not in question: What has re-emerged in the wake of Oprah’s interview, is controversy about the date of their first encounter.

Witnesses have come forth alleging that Diana actually met Hewitt sometime in 1983. Emma Stewardson, his girl friend at the time, alleged that he was “two-timing” her, and that he visited Highgrove, Charles’ country home, at least nine months in advance of Harry’s birth when the prince was away.

It is also alleged that Hewitt, before the birth of Harry, rented a room in West London as a secret meeting place, and that the Princess, in heavy disguise, went there time and time again for clandestine rendezvous.

Not only that, but many of Hewitt’s colleagues in the Life Guards claimed that he boasted of his affair with Diana during its early stages, aka before the birth of Harry. The prominent Scottish journalist, Ross Benson, later wrote: Years after their affair, Diana, to her horror and to the horror of her in-laws at Buckingham Palace, learned that Hewitt was “more than boastful about how well he knew Diana.”

This was later “outed” and publicized in Simone Simmons’ biography Diana, The Last Word, published in 2003. Ms. Simmons was a healer and a clairvoyant, who, during the last five years of Diana’s life, became her confidante. Her book revealed that Diana admitted that with Hewitt, she experienced oral sex for the first time, and her first orgasm.

Diana claimed that “Jimmy treats me like a sex slave,” and that she loved it. She lavished gifts on him, including a diamond tie pin, and form-fitting underwear “to show off his best hidden assets.” She opened charge accounts in his name, later admitting, “He was bloody expensive.”

For five years, their love affair flourished, although Diana admitted that outside the boudoir they had little in common, finding him as interesting as a knitting pattern. According to Simmons, as confided in her by Diana, “His head was in his trousers.”

Deep into their affair, Diana confessed to being nosy and began to suspect that Hewitt was having affairs outside their boudoir in Kensington Palace. One night, she searched the pockets of his trousers and found the phone number of a woman who turned out to be one of his mistresses. When she confronted him, he angrily denied it: “How could I make love to you so forcefully, and for such extended periods, if I’m wasting my seed elsewhere?” he was rumored to have said at the time.

She hired detectives to follow him, and indeed, one of the men she employed turned up with some incriminating proof, some of which was photographic.

Gallantly, one of her “private dicks” told her, “Ma’am, I just don’t understand. He’s the luckiest man on the planet, and he turns elsewhere.”

Hewitt later revealed to the British press that after Diana said farewell, he contemplated suicide. “I got into my car and loaded a few things,” he said, “and then took the ferry across the Channel to France. I planned to shoot myself in transit. But at the last minute, my mother insisted on going along, too, and she may have saved my life.”

During the course of their relationship, whenever Hewitt was away from her for any extended period, Diana wrote him passionate love letters. She later admitted to Simmons, “They were red hot, even pornographic, praising his lovemaking.”

Later, she heard he was going to sell her letters to the highest bidder, and she knew at once she had to buy them herself. In a call to him, she learned that he wanted £250,000 for them, later doubling that price. She felt she had to pay it.

He wanted the cash-only transaction to take place in the resort of Benidorm on the eastern coast of Spain. With the banknotes stuffed in a large purse, she flew to Spain, wearing a wig and dark glasses. However, someone—perhaps Hewitt—alerted the press and paparazzi, and she was mobbed. Without retrieving the letters, she immediately returned to London on the next plane.

Much more information about these love letters later appeared in a tell-all book. Published in 1994, it was entitled Princess in Love by Ann Pasternak. [Pasternak is a descendant of the early 20th-Century Russian writer Boris Pasternak, who had written the highly acclaimed novel, Doctor Zhivago, which was adapted into a box office hit in 1965.]

After reading Princess in Love, Diana gave her own review: “I hope his cock shrivels up.”

Diana read the book with heartbreak and in tears. According to those close to her, she felt a sense of the most awful betrayal—first from her husband, Charles, and now from her years-long lover, Hewitt.

She also had to face indelible rumors that Hewitt and Prince Harry looked alike, especially with their red hair. Around the time Princess in Love was released, a British tabloid published a picture of Harry, age 11, and Hewitt, age 11. They looked like identical twins.

Diana consistently denied that Hewitt was the father of Harry, saying he had been born two years before the debut of her affair, and that Harry’s red hair derives from genetics associated with her own family, the Spencers. In fact, she sometimes referred to her growing boy as “My Little Spencer.”

[In Season Four of the recent hit TV series, The Crown, Hewitt is portrayed by actor Daniel Donskoy.]

When Bill Clinton, then-U.S. President, was impeached, in part because of his affair with Monica Lewinsky, Diana wrote him a long letter, sharing his grief and referring to each of them as “fellow sufferers.”

[Unofficially, she gossiped with Simmons about the U.S. President, too: “I don’t find him sexy at all. Perhaps that awful girl Monica did. I wonder what the Presidential willy looks like.”]

A reporter for the New York Daily News described the state of affairs like this: “Diana’s former lover, James Hewitt, wrote a kiss-and-tell bio of her. He has suffered bad Karma ever since. His riding school has failed, and he was busted for alleged drug possession and tax evasion.”

In 2009, after publicizing his affair with Diana in a relentless stream of tabloid reality TV shows, Hewitt opened a bar, the Polo Club, in Spain.

It was in Marbella, the “mobbed by British expats” resort along the southern coast of Spain. Positioned midway along that resort’s “Golden Mile,” it drew the rich and famous of international society until Hewitt closed it in 2013.

[Marbella, of course, had been chic long before Hewitt “discovered” it. In 1954, the Marbella Club opened, catering to an international coterie of movie stars, business tycoons, star athletes, and aristocrats, many with titles. Famous names like Bismarck, Rothschild, Thurn und Taxis, and Metternich patronized it regularly. At one point, the Marbella Club was run by Princess Marie-Louise of Prussia, the great-granddaughter of Kaiser Wilhelm II. Prince Rainier and Princess Grace were among the visitors, as was King Fahd of Saudi Arabia, who spent up to five million Euros a day here. Everyone from the Aga Khan IV to Julio Iglesias followed, as did exiled Cuban dictator Fulgencio Batista, who had escaped from Cuba after stealing $300 million from its Treasury.]

It was obvious whenever he was there that Hewitt had evolved into a “babe magnet” of international notoriety. Night after night, chicly dressed women clustered around him. Although interpreted in many quarters as an unpatriotic “cad” for his revelations about Diana, he often behaved like an English gentleman full of charm and articulate grace, the kind of man a young woman could take home to meet her parents. It was obvious why Diana had found him so appealing.

Charles, it was widely understood at the time, had moved into separate quarters shortly after their marriage. In May of 2017, Hewitt—then living in England—suffered a simultaneous heart attack and stroke which left him fighting for his life in a hospital. He never married, and is said to have no children, unless Prince Harry was one.

Reportedly, he’s living in Devon today with his elderly mother, a former dental surgeon, having found work as a gardener. His last known statement to the press was, “One thing went wrong in my life: Diana and I fell in love.

As for his opinion of Harry, all he had to say was ‘Poor Chap.’”

Darwin Porter, sometimes with the collaboration of Danforth Prince at www.BloodMoonProductions.com, is the author of at least 50 seminal biographies of celebrities who include Judy Garland, Donald Trump, James Dean, Bill & Hillary Clinton, and Ronald Reagan and his intensely competitive wives (Jane Wyman and Nancy Davis). His most recent biography is an overview of the arts-industry socialite Mercedes de Acosta, lover, muse, and mentor to some of the most influential and empowered actresses of the 20th Century.

For information about how you can meet him for an overnight at his home in New York City, click on https://AirBnb.com/H/Magnolia-House or contact DanforthPrince@gmail.com.

Be sure to listen to Darwin’s discussions with Anita at regular intervals on Zoomertimes TV. Boomer Times: Bringing you better access to a familiar friend.