Babies and Dogs, Not Wolves, Make the Same Classic Mistake

Babies and Dogs, Not Wolves, Make the Same Classic Mistake 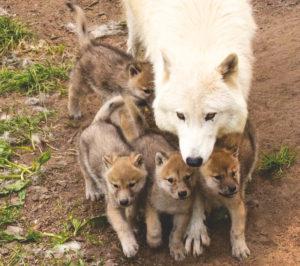 A new study shows that dogs and young human babies both make the same classic error in a famous psychology experiment—while wolves raised by people do not.

The experiment was originally devised decades ago by the well-known child psychologist Jean Piaget. He found that if babies 10 months old or younger repeatedly see a toy placed in location A, they will look for the toy there even after watching the toy being placed in location B.

This is called the “A-Not-B Error.” By 1 year of age, children have grown out of it. But it’s such a weird observation that psychologists have been talking about it for decades. Some think it has to do with how babies perceive the permanence of objects. But others think it has something to do with how infants learn from people.

Adam Miklosi of Eotvos Lorand University in Budapest, Hungary, is interested in how dogs have evolved to live with people, so he decided to see how dogs and their wild relatives, human-raised wolves, would do on this test.

In their experiment, wolves were generally not misled by what they had seen humans do before, according to a report in Science. They’d make a beeline for the right hiding place. But dogs would act like a 10-month-old baby, going to screen A even though they’d just seen someone put the toy behind screen B.

Miklosi think this means that dogs interpret the situation as a learning situation and choose to trust what the human is communicating rather than what they see with their own eyes.

“The dogs are sort of looking at the human as a sort of a teacher that has the privilege of some sort of information and they don’t want to override it with their own understanding of the case,” says Miklosi.

When the experiment was rigged up so that it involved no people, and the toys were instead dragged from place to place by a moving string, the dogs were less likely to make the mistake. They suddenly acted more like their wolf relatives.

“If there’s no teacher there, then the dogs are switching back, and then they are solving the problem on their own,” Miklosi says.

Human babies also were more likely to find the toy in the correct location if it was moved by a string instead of a person. “For me,” says Miklosi, “this was the biggest surprise.”

He believes all this shows that the presence of a person—social interaction—has a profound effect on how both dogs and babies interpret the situation.

For Dogs, It All Depends On the Person

There was one difference between dogs and young babies, though. When they redid the classic experiment but had more than one person do the hiding, it didn’t matter to the babies. They kept reaching for screen A, suggesting they were able to generalize about people. But adding a new person changed everything for the dogs. “For the dog, if you’re changing the person, the knowledge is gone,” says Miklosi.

The dogs ignored what had previously happened and, like the wolves, went straight to the toy. “It’s a very original approach. It’s a very thought-provoking experiment,” says Clive Wynne, who studies dog cognition at the University of Florida. “I think like a lot of good studies, it doesn’t lead so instantly to conclusions. It leads to new questions.”

For example, he says, “there’s a puzzle in this paper in that you’ve got adult dogs behaving like 10-month-old children, when 10-monthold children are only going to act like this for two more months. They’re going to grow out of it very quickly.” Still, he thinks we need more studies like this one, to learn about both human cognition and the inner lives of our canine companions.

“It is important that we understand how dogs think about us,” Wynne says, “because we have 70 million of these animals in our homes in the United States—more dogs than we have children.