The Oldest Woman in the World

The Oldest Woman in the World 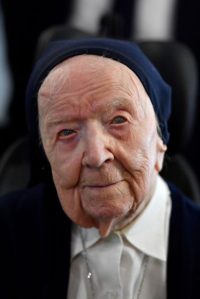 In the city of Toulon in southeastern France, there resides a woman who is verified as the oldest in the world. Since she joined a Catholic order in 1944, she’s been called Soeur (Sister) André, born Lucile Randon on February 11, 1904, during the era when Theodore Roosevelt was in the White House.

She is blind and in a wheelchair at the Ste. Catherine Labouré nursing home. In the same establishment, were 88 other residents, 81 of whom contracted the Covid virus, which killed ten of them.

As a teenage girl, she opposed the invention of the airplane and motor vehicles. “I knew they would be turned into weapons of war to kill millions, and I’ve survived two World Wars to see my fear come true.”

“I survived the first pandemic in 1918, and I knew I could pull through yet another one,” she told the French press. “Once a year on my birthday, I indulge in my favorite dessert, a peach-flavored Baked Alaska with a glass of champagne. I’m looking forward to having that treat again on my 118th birthday in 2022.”

Incidentally, she is not the oldest verified person on earth. That honor goes to Kane Tanaka of Japan who is 118. Most people who are more than a century old live in the U.S. or Japan.

The oldest verified person who ever lived was 122 years old. Jeanne Calment (1875-1997), also a French citizen. All these survivors of “a century of living” are called “supercentenarians.”

“My advice to the world,” says Soeur André, “is never give up hope and trust in God. Stay strong even in your darkest hours, and, if you live long enough, you’ll have plenty of those.”

Darwin Porter is a monthly columnist for Boomer Times.