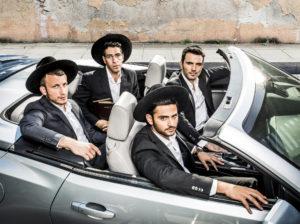 Since the pandemic, movie-goers have looked toward streaming platforms to cure their cabin-fever. Jewish themed TV series such as Unorthodox and The Marvelous Mrs. Maisel seemed to increase in popularity.

ChaiFlicks offers over 300 acclaimed feature, documentary and short films (both classic and new), TV series, stage productions, plus music and dance performances that embrace Jewish and Israeli tradition and culture.

Three new programs per week are added to the channel, which has an endless variety of genres. The latest additions are Israel’s smash hit comedy series The New Black, which follows the adventures of four Haredi students at a yeshiva in Jerusalem, and The Tobacconist, a vibrant coming-of-age drama starring the late Bruno Ganz and based on the international bestseller by Robert Seethaler.

ChaiFlicks is user friendly and doesn’t break the bank. The monthly subscription price is only $5.99 per month or a discounted annual price of $65.99 with a 7-day free trial.