“The Don Bailey Story… From Truck Driver to Multi-Millionaire” by Don Bailey, Jr.

“The Don Bailey Story… From Truck Driver to Multi-Millionaire” 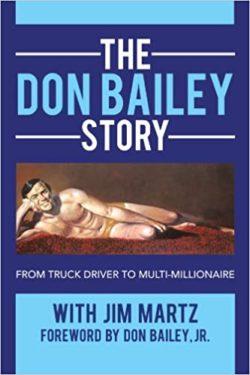 The life of Don Bailey is a fascinating one and his biography is a tell-all about a man, who today at 87, is still full of vim and vigor. If his name rings a bell for you, it may be because he is the half-naked man sitting on a carpet smiling at the passersby on I-95’sbillboards. It was an aha moment for me when he introduced himself on the telephone and offered to have his book reviewed. After reading his life story, I am in awe of him and his accomplishments. This is like no other biography that you have probably ever read, and you will be totally mesmerized by this poor Georgia boy who, through hard work and just being plain smart and creative, is living the dream.

Don grew up in a small town in Georgia, dirt poor, but with an inquisitive mind and good attitude. His family moved to Miami searching for a better life. His father not only was hard working but wanted to earn a better living, so with$150 opened a small store and found opportunities to improve his family’s life. Don learned quickly from his father’s guidance what was important in life which he still carries in his actions today. Family is most important and although he has been divorced twice, he says, “My wife, Donna, is a keeper!” He is the master of blended families, with his wife and ex-wife, their children, and other family members celebrate holidays and keep in close touch. Whatever they need and want, Don’s heart and wallet accommodates.

But the real story is about Don Bailey’s business success. He takes chances and is highly creative. He started saving as a young kid and slowly but surely, he bought real estate. Although they were small parcels, homes, buildings, he accumulated them throughout Miami. His big job was to work for a carpet company, Harry Rich, where he learned about the business and was a top salesperson. When it came time to work for himself, he started the Don Bailey Flooring (Carpets). In order to get noticed, he devised a far-out outrageous photo of himself posed with only a tiny Tarzan-like covering of his genitals and with a wide smile stared at the lookers. He put this image on his trucks and on billboards on I-95. And although his family and close friends and employees were aghast and embarrassed, his business thrived and became well known and successful. He loved his customers and employees and was known for honest dealings.

Frankly, I couldn’t put his book down. It is filled with so many admirers’ opinions and heartfelt stories about him and the kind of a family man and boss he was. He treated many of his employees as sons and daughters and gave them homes, cars, extra money, and affection. When people didn’t know him, they were turned off by his vulgarity, using the four-letter word “f…k” in many situations. His sons put up with his “one man band” antics and he never ceased to amaze his kids and wives. He is one of a kind, and I’m glad someone wrote his biography, because it would be difficult to capture all his life’s journey in conversation. He continues living outrageously. He is one cool dude.

CLICK HERE to purchase a copy of this book.