“South Beach at War: Sun, Sand and Soldiers During WWII”

Camp Miami Beach — The Most Beautiful Boot Camp in America 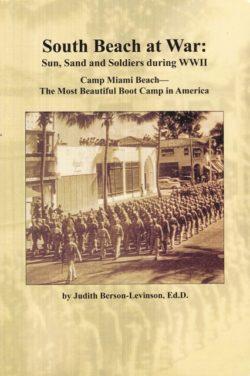 Where were you between the years 1942 and 1945? If you lived in Miami Beach or were in the military and lucky enough to be sent to Miami Beach for training, this book will bring back so may memories. Before Miami Beach was turned into a military training camp, it was a small resort city and home to many elders who enjoyed sitting on their hotel porches watching the waves and people passing by.

Judith Berson-Levinson, the author, has spent over 19 years collecting photos and stories from men and women from all branches of the military (Army, Navy, Marines, Air Force). It is a captivating story that has never been told in this personal way. The servicemen came from all over the U.S. and it was celebrated that they were the lucky ones who saw beach and ocean for the first time in their lives.

We all know that men in uniform are attractive to young women especially, and so lots of dancing and partying was an added benefit. Many of the stories oozed with amazement of what Miami Beach meant to these trainees. What I found especially meaningful was when the war was over, the dream of so many of these servicemen was to move to Florida and enjoy the warm weather, beaches, and exciting lifestyle.

Nearly half a million men trained on the beaches and it was serious work since it was known that German subs were lurking out in the ocean. When I read many stories of how important it was to go through this training, knowing that many of them would be sent overseas, and this time in their young lives might be the best memories they had. This book has created events for many of the military who came here, finding long lost friends and being able to recount what it was like during 1942 through 1945 on Miami Beach.

Growing up in Miami Beach since my family arrived in 1946from New Jersey, I loved the stories and photos and felt such a kinship. The photos brought back for me many of the stores and streets that I shopped and walked and are no longer there.

There was only one Miami Beach and Judith Berson-Levinson captured that time and place. She still asks for photos and stories to add to her collection. I’m sure she will be writing a second edition.

Judith Berson-Levinson, Ed.D. holds a doctorate degree from Florida International University in Adult Education and is retired from a long career as a college administrator. She now works with her husband managing real estate holdings. A native of New Jersey, she has lived in Miami Beach since 1974.