February 2021 Book of the Month 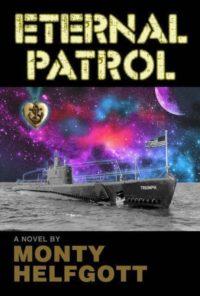 Monty Helfgott’s book, Eternal Patrol is spellbinding! From the moment you start reading about his main character, Austin Quinn, you fall for him, and appreciate the love he gets and gives his parents. I knew him as though he was my son and was excited that he made his dream come true and the read er wonders if it were really true?… to be on a submarine? Before he leaves, his parents give him a family heirloom, an amulet for good luck.

Austin and his buddy rode into town on his friend’s Harley. Off they went to a USO dance in New London, the nearby town to the submarine base. They were going to make the most of their time on land. When they arrived, the Big Band music was playing, and women were waiting to dance. Austin spotted a woman he was drawn to and from then on, the reader enjoys the talk Austin shared with a lady he briefly met, Madison Moorland, yet after two weeks. They knew they would be together forever.

That’s how it started, but as you continue to read, you are introduced to some remarkably interesting characters aboard the submarine. I, personally, would never want to be on a submarine as it seems claustrophobic, but as you read, you forget about where they are and where they are going.

There are so many futuristic episodes that it is like a space odyssey happening under the sea. There are so many ways to interpret this novel, but it keeps you guessing chapter through chapter. Oftentimes, I lost the place where they were, and the science fiction genre kicked in. I wondered how this could all be happening. And just when you think you figured it out, Helfgott throws another curve.

Monty Helfgott has an Ed.D. in psychology which enabled him to elaborate on the char acters’ personalities so we come to know each one. The captain was very smart, but very ego driven and obsessed with his submarine and its experimental capacities. The medical officer, quite different, becomes a friend to Austin, and keeps the story from becoming too fantastical. Relationships are different on a submarine because the close ness emphasizes good and bad situations.

I am sure readers will be incredibly surprised at the ending as I was, which made the story even more impossible. I had to go back and reread many of the chapters to understand what was really happening. The last chapter was a major surprise and had me in tears. This book is ready to become a great movie.


Dr. Monroe “Monty” Helfgott holds an Ed.D from Columbia University majoring in Educational Psychology. He has written five books in his field, and wrote a trilogy called The Silence which we have reviewed as Book of the Month in Boomer Times. His book cover for Eternal Patrol is designed by Weiman Design which has won the American Graphic Design award. He has also written books for children with special needs. He and his wife, Ingrid, live in Boynton Beach, Florida.

CLICK HERE to purchase a copy of this book.