‘An icon’: Sidney Poitier hits a new milestone by becoming the namesake of a new film school

‘An icon’: Sidney Poitier hits a new milestone by becoming the namesake of a new film school

In 1963, Sidney Poitier made a film in Arizona, “Lilies of the Field.” The performance led to a huge milestone: He became the first Black winner of a lead-acting Oscar.

Now, Arizona is the site of another milestone for the legendary actor and filmmaker. Arizona State University has named its new film school after him. It was to unveil The Sidney Poitier New American Film School at a ceremony on Monday.

The decision to name the school after Poitier, 93, is about much more than an emphasis on diversity, said Michael M. Crow, president of the university, in an interview ahead of the unveiling.

“You’re looking for an icon, a person that embodies everything you stand for,” Crow said. “With Sidney Poitier, it’s his creative energy, his dynamism, his drive, his ambition, the kinds of projects he worked on, the ways in which he advanced his life.”

“Look at his life: It’s a story of a person who found a way,” he said of the actor, who was born in Miami and raised in the Bahamas, the son of tomato farmers, before launching a career that went from small, hard-won theater parts to eventual Hollywood stardom. “How do we help other young people find their way?”

The university, which is expanding its existing film program into its own school, says it has invested millions of dollars in technology to create what’s intended to be one of the largest, most accessible and most diverse film schools. Crow said that much like the broader university, the film school will measure success not by exclusivity but by inclusivity.

By expanding both its physical resources and flexible learning options like online study, it hopes to enroll thousands more students, teaching them skills that go far beyond traditional moviemaking.

The school will move in the fall of 2022 to a new facility in downtown Mesa, Arizona, 7 miles from the university’s Tempe Campus. It will also occupy the university’s new center in Los Angeles.

The university did not make Poitier, who has been out of the public eye for some time, available for an interview. His daughter Beverly Poitier-Henderson told The Associated Press her father was “doing well and enjoying his family,” and considered it an honor to be the namesake of the new film school.

Poitier-Henderson and two of Poitier’s other daughters described in interviews how the film school’s emphasis on inclusivity and access aligned with their father’s long-held ideals.

“If it has my Dad’s name on it, it has to be inclusive, because that’s the foundation of who he is and what he stands for,” said Anika Poitier, like her father a filmmaker. “And it’s important to not only have inclusion but to have diversity, and to give people the opportunity to tell their stories. I think it’s imperative to cast a wide net and allow anyone who’s called to tell their story to learn how to do that.”

Sydney Poitier Heartsong, the actor’s youngest daughter, noted that the two most important things to her father as she grew up were education and the arts.

“Those are the two tracks that run throughout his life, that define what he has contributed and defined what he felt was important to impart to his kids…the arts were also a form of education. He wanted to pass that on to all young people but specifically young people of color.”

Poitier Heartsong added that the new school had special resonance in a time when “we’ve come to recognize that from a socioeconomic standpoint, a lot of (elite) schools exclude people of color disproportionately—and people without the means to go to them. That is the antithesis of what my father would want to be a part of.”

In his heyday, when he won his Oscar, one of her father’s biggest complaints, she said, was that “he was the only one up there, and he wanted others to be up there with him.”

The ASU film production programs now enroll 700 students, said Steven Tepper, dean of the Herberger Institute for Design and the Arts there, but that number is expected to double over three to five years.

“I just hope that the students at the Sidney Poitier Film School take up the mantle of responsibility the way our father took up the mantle when he was coming up in his career,” said Poitier-Henderson, “and tell their stories regardless of finances, which is easy for us to say. But you’ve got to be true to yourself. It’s a very powerful thing, and I’m looking forward to seeing who comes out of it. I’m not looking for the next Sidney Poitier, but I’m looking for the next person who is true to themself.

The film icon, who “knows how to make a room explode,” turned 90 on Feb. 20 and invited THR to his private bash at Beverly Hills’ Spago, where four generations of his family posed for an epic photo.

It turns out that Sidney Poitier—the Oscar-winning actor and cultural symbol synonymous with dignity and rectitude—not only has a great sense of humor, but also a flair for colorful language. “He’s one of the most eloquent curse-word users,” says godson Mike Jordan admiringly on the afternoon Poitier and his extended family—his wife, his ex-wife, 27 of his children, grandchildren, great-grandchildren and godchildren and a few close friends—gathered for his 90th birthday at his favorite Beverly Hills eatery, Spago. Adds grandson Etienne Gouraige, “He knows how to make a room explode.”

Born on a tomato farm in the Bahamas, Poitier ended up in New York by way of Miami and in 1964 became the first black winner of the best actor Oscar (for Lilies of the Field). He supported the dreams of other family members to pursue careers in the arts; after a trip with Poitier to Walt Disney Animation Studios, Gouraige made the decision to study at the Savannah College of Art and Design (along with his sister Gabrielle). Says Joanna, Poitier’s wife of more than 40 years, “He is the most wonderful, generous, kind, honest man with the most integrity that I’ve ever known in my life. 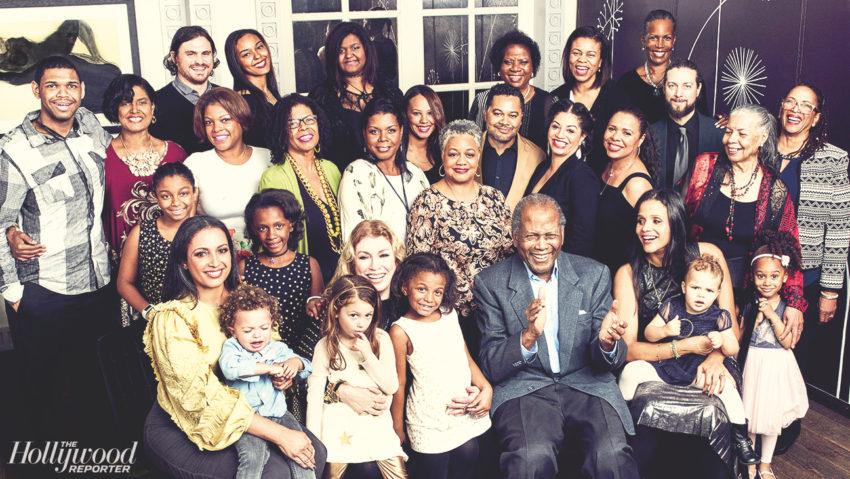