Most Photographed Baby and Father 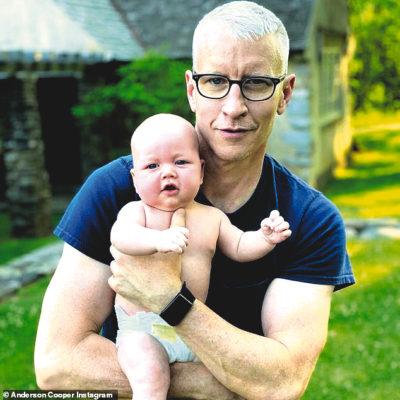 Anderson Hays Cooper was born in New York City in 1967 and is an American television journalist. He is the primary anchor of the CNN news broadcast Anderson Cooper 360°. The program is usually broadcast live from a New York City studio; however, Cooper has often broadcast from CNN’s studios in Washington, D.C., or on location for breaking news stories happening around the world. In addition to his duties at CNN, Cooper serves as a correspondent for 60 Minutes on CBS.

Cooper lived a magical life as the son of Gloria Vanderbilt, the heiress to the Vanderbilt fortune and famous designer of fashion. She and Cooper were awfully close until her death in June 2019 at the age of 95.

His life has been filled with traumatic events as Cooper’s father, Wyatt suffered a series of heart attacks while undergoing open-heart surgery, and died in 1978, at the age of 50. Cooper considers his father’s book Families to be “sort of a guide on…how he would have wanted me to live my life and the choices he would have wanted me to make. And so, I feel very connected to him.

Anderson Cooper attended Yale University, majoring in political science, and graduated with a Bachelor of Arts in 1989. He has traveled the world as a journalist and observer.

Another tragedy happened when Cooper was 21. His older brother, Carter Vanderbilt Cooper, committed suicide in 1988, at age 23, by jumping from the 14th-floor terrace of Vanderbilt’s New York City penthouse apartment. Gloria Vanderbilt later wrote about her son’s death in the book A Mother’s Story, in which she expressed her belief that the suicide was caused by a psychotic episode induced by an allergy to the anti-asthma prescription drug salbutamol. Anderson cites Carter’s suicide for sparking his interest in journalism.

Anderson Cooper is openly gay; according to The New York Times, he is “the most prominent openly gay journalist on American television.” Cooper says, “The fact is, I’m gay, always have been, always will be, and I couldn’t be any more happy, comfortable with myself, and proud.”

On April 30, 2020, Cooper announced the birth of his son Wyatt Morgan by a surrogate though Cooper and Benjamin Maisani, his longtime partner are no longer romantically involved, the pair plan to co-parent. Wyatt is named after Cooper’s late father, Wyatt Cooper, and his middle name is derived from the Vanderbilt side of his family.