“HUMANISM… The What, Who, Why, When and Where” by Charles Block 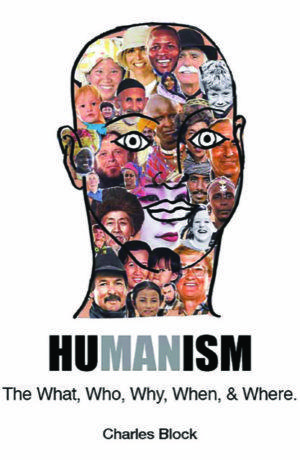 HUMANISM is a rare book, especially if you want to read about the evolution and effect of humanism during prehistoric and ancient times fast forwarding to the 21st century. But first let’s define humanism. The word feels good when you say it, but I suggest you read this magnificent book and allow yourself to be assured that you are living at the right time in history. One of the definitions I found most succinct is “it views humans as solely responsible for the promotion and development of individuals and emphasizes a concern for humans in relation to the world.”

In the thirteen chapters, Charles Block chose his heroes who contributed to the struggle of humanism and for whom I am especially grateful. Those featured were: the Persian Saadi Shirazi, one of the most influential poets of the medieval period; Francesco Petrarch, New York Times labeled him the first humanist; Giovanni Picco della Mirandola, the most modern and humanistic philosopher of the Italian Renaissance; Johannes Reuchlin, who redefined the boundaries between Christians and Jews; Baruch Spinoza, philosopher who pointed the way to the Age of Enlightenment; Immanuel Kant, who had strong humanism views about Christians and Jews; George Washington, first president of the United States and brilliant political leader; Mary Wollstonecraft, journalist, scholar, educator and courageous fighter for women’s rights; Frederick Douglass, social reformer. orator, writer, abolitionist, statesman; Mark Twain, writer, humanist, entrepreneur, publisher, lecturer; Mohandas Gandhi, most influential humanist in history; Pope John XXIII, who promoted unity among the various religions and peace among the various countries on this planet; Anna Eleanor Roosevelt, the most famous woman of her time; Dr. Norman Ernest Borlang, Nobel Prize winner for his brilliant agricultural innovation. Each person who Charles Block chose to feature was so interesting and it must have been difficult to choose. Who would you have chosen?

This book opened my mind as it will yours to appreciate how much can be accomplished in our own lives if we realize that each of us have a candle to light as those before us which caused the world to shine from the beginning of time to the present. This book will inspire you, motivate you, and educate you about people whose energy changed the world. I cannot emphasize enough why this book is one of the most important books I have ever read, and you will be well served to buy it.

About the author:
Charles Block was born in 1927, witnessed historic events of the past century. He earned a Master’s degree in Mathematics from Harvard. He was involved in a MIT government funded research lab developing guidance systems that were eventually used for orbiting satellites. His first book was Morality, Whose Idea Was It Anyway? Charles lives in Aventura, Florida with his wife Myriam.

(To purchase Humanism, The What, Who, Why, When, and Where, go to Amazon.com)