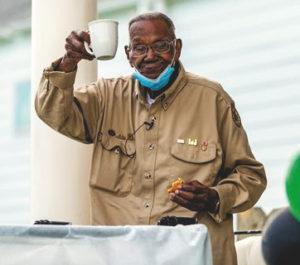 The oldest living WWII veteran celebrated his 111th birthday in September at his New Orleans home, according to the National WWII Museum.

Lawrence Brooks was honored with plane flyovers at his home, a socially distant performance from the museum’s vocal trio and almost 10,000 birthday cards from around the world.

During WWII, Brooks served in the predominantly African-American 91st Engineer Battalion. The battalion was stationed in New Guinea and then the Philippines during World War II.

Brooks enjoyed his birthday celebration with his family on his front porch as a small group of the museum’s staff, wearing masks, delivered the cake and cards. All the while, Brookes was serenaded by The Victory Belles, the museum’s vocal trio. The military flyover was courtesy of the Aeroshell Aerobatic Team.

Brooks also had an early celebration courtesy of the New Orleans VA when he said his secret to a long life. “No secret. Just serve God and be nice to people,” Brooks said.