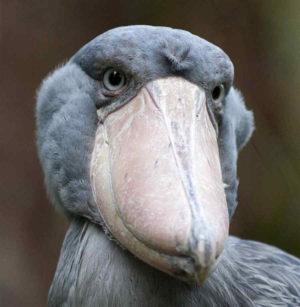 The shoebill is a type of bird that cannot be easily classified. The reason lays in the fact that a shoebill has features that are characteristic for genetically unrelated types of birds such as storks, pelicans, hamerkop and herons. The shoebill is also known as whalehead or shoe-billed stork.

This beautiful bird can be found only in eastern parts of Africa, all the way from Sudan to Zambia. The shoebill prefers life in tropical dense marshes, swamps, and wetlands. The shoebill is listed as vulnerable species, with no more than 8000 birds left in the wild. Number of shoebills is decreased due to habitat loss, destruction of nests, increased hunting and because of the pet trade.

Interesting Shoebill Facts:
The shoebill is a large bird. It can be almost 5 feet tall, 4 feet long, reaching 15 pounds in weight. The body is covered with bluish-grey plumage. It has a strong neck, long legs, and broad wings.

The most prominent feature on the shoebill’s body is its beak. It is large and shaped like a shoe, which is the reason why the bird is named “shoebill.” Beak is 9 inches long and 4 inches wide. It ends with a nail-like hook, which is used for killing of the prey.

The shoebill feeds during the night. It is an ambush predator, which can stay silent for exceedingly long period of time while waiting for the prey to appear. Because of that, it is often called a “statue-like” bird. It eats different types of fish, amphibians, lizards, snakes, rats and even baby crocodiles. When it detects the prey, it uses incredible speed, accuracy, and power to catch it. Before swallowing, it will cut the prey in half with its sharp bill.

The shoebill is a solitary animal that gathers only for mating and taking care of the young. It is “quiet” most of the time, but it can produce sound that is used for communication. Adult birds usually produce sounds by clapping the bills during nesting season. Young birds can produce hiccup-like sound when they are hungry.

Mating season is usually associated with onset of dry season, to prevent flooding of the nests. Nests are built amid swamp grasses. The female lays one to three eggs. They will hatch after 30 days-long incubation. Young birds are brown at birth, and they are not able to stand on their feet until the age of two and a half months. They are dependent on the food provided by parents even when they start hunting on their own, at age of three and a half months.

Unlike storks, pelicans, and herons, the shoebill does not nest in colonies. Only three nests can be found per one square kilometer. They become sexually mature at age of three to four years.